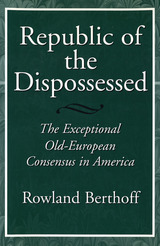 Do Americans, in all their cultural diversity, share any fundamental consensus? Does such a consensus, or anything else, make America exceptional in the modern world?

Since 1960 most historians have answered no--except perhaps for the current nostalgia for the Eisenhower years (the "Ozzie and Harriet" years of popular recollection) of middle-class American prosperity.

In Republic of the Dispossessed social historian Rowland Berthoff maintains not only that there was--and still is--a middle-class consensus and that America is exceptional in it but that it goes back some five hundred years. The consensus stems from all those European peasants and artisans who, from 1600 to 1950, fled dispossession in the Old World. They brought with them basic social values that acted as a template for middle-class American values. To consider modern American society as exceptional--that is, as distinctive and different from any contemporary European pattern of thought--is therefore, in Berthoff's theory, not at all the "illogical absurdity" that current conventional wisdom makes it.

The Berthoff thesis, as he develops it in these ten essays from throughout the course of his career, is well worth a second look by those within and beyond the field of social history. It suggests that the ideal--both peasant and classical republican-- of maintaining a balance between personal liberty and communal equality has long inspired American reaction to the drastic modern changes of industrialization, urbanization, and immigration.

Observing that most Americans still see themselves as independent, basically equal, middle-class citizens, Berthoff explains the current apprehension among Americans that at the end of the twentieth century they are once again being dispossessed-- thus, the current emphasis on "traditional values." Because that problem is the same that worried their European ancestors as much as five hundred years ago, Berthoff argues, the time has come to face the question head-on.

Rowland Berthoff is William Eliot Smith Professor Emeritus of History at Washington University in St. Louis, Missouri. He is the author of, several works, including An Unsettled People: Social Order and Disorder in American History.