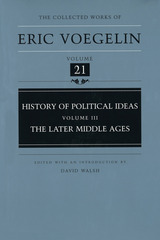 In The Later Middle Ages, the third volume of his monumental History of Political Ideas, Eric Voegelin continues his exploration of one of the most crucial periods in the history of political thought. Illuminating the great figures of the high Middle Ages, Voegelin traces the historical momentum of our modern world in the core evocative symbols that constituted medieval civilization. These symbols revolved around the enduring aspiration for the sacrum imperium, the one order capable of embracing the transcendent and immanent, the ecclesiastical and political, the divine and human. The story of the later Middle Ages is that of the "civilizational schism"—the movement in which not only the reality but the aspiration for the sacrum imperium gradually disappeared and the unification of faith and reason dissolved.

His recognition of this civilizational schism provides Voegelin with a unique perspective on medieval society. William of Ockham, Dante, Giles of Rome, and Marsilius of Padua all emerge in Voegelin's study as predecessors to modern thought; each turns to personal authority and intellectual analysis in an attempt to comprehend the loss of the sacrum imperium as an authoritative ideal. Voegelin is further drawn into investigations that, despite insufficient attention by scholars, still bear relevance to the study of the later Middle Ages. The mysticism apparent in Piers Plowman and the apocalyptic revolt of Cola di Rienzo are merely two reactions to the disintegration of wholeness.

Yet the story of the later Middle Ages does not merely revolve around disintegration. Voegelin recognizes the emergence of the constitutional political tradition as the most positive development of this period. He is at his best when explaining the difference between the presence of a representative institution and the growth of communal consciousness. Voegelin's study of the English political pattern is matched only by his unique perspective on the German imperial zone, culminating in a fitting conclusion on Nicholas of Cusa—the one political thinker with the ability to evoke the unity of mankind beyond fragmentation.

The Later Middle Ages is at once a brilliant examination of the symbols that characterized medieval society and a remarkable predecessor to Voegelin's study of the modern world, beginning with the Renaissance and the Reformation.

David Walsh is Professor of Politics at the Catholic University of America in Washington, D.C. He is the author of The Growth of the Liberal Soul and After Ideology: Recovering the Spiritual Foundations of Freedom.