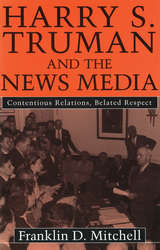 Based upon extensive research in the papers of President Harry S. Truman and in several journalistic collections, Harry S. Truman and the News Media recounts the story of a once unpopular chief executive who overcame the censure of the news media to ultimately win both the public's and the press's affirmation of his personal and presidential greatness.

Franklin D. Mitchell traces the major contours of journalism during the lifetime and presidency of Truman. Although newspapers and newsmagazines are given the most emphasis, reporters and columnists of the Washington news corps also figure prominently for their role in the president's news conferences and their continuing coverage of Truman and his family. Broadcast journalism's expanding coverage of the president is also explored through chapters dealing with radio and television.

President Truman's advocacy of a liberal Fair Deal for all Americans and a prudent and visible role for the nation in world affairs drew fire from the anti-administration news media, particularly the publishing empire of William Randolph Hearst, the McCormick-Patterson newspapers, the Scripps-Howard chain, and the Time-Life newsmagazines of Henry R. Luce. Despite press opposition and the almost universal prediction of defeat in the 1948 election, Truman was victorious in the greatest miscalled presidential election in journalistic history.

During his full term, Truman's relations with the news media became contentious over such matters as national security in the Cold War, the conduct of the Korean War, and the continuing charges of communism and corruption in the administration. Although Truman's career in politics was based on honesty and the welfare of the people, his early political alliance with Thomas Pendergast, Kansas City's notorious political boss, provided the opportunity for a portion of the press to charge Truman with subservience to Pendergast's own agenda of corrupt government.

The history and the dynamics of the Truman presidency and the American news media, combined with biographical and institutional sketches of key individuals and news organizations, make Harry S. Truman and the News Media a captivating and original investigation of an American president. Well written and researched, this book will be of great value to Truman scholars, journalists, and anyone interested in American history or presidential studies.

Franklin D. Mitchell is Associate Professor of History at the University of Southern California. He is the author or coeditor of several books, including The Homefront: America during World War II.