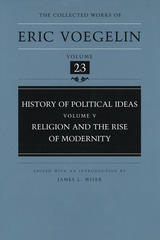 Examining the emergence of modernity within the philosophical and political debates of the sixteenth century, Religion and the Rise of Modernity resumes the analysis of the "great confusion" introduced in Volume IV of History of Political Ideas. Encompassing a vast range of events ignited by Luther's Ninety-Five Theses, this period is one of controversy, revolution, and partiality.

Despite the era's fragmentation and complexity, Voegelin's insightful analysis clarifies its significance and suggests the lines of change converging at a point in the future: the medieval Christian understanding of a divinely created closed cosmos was being replaced by a distinctly modern form of human consciousness that posits man as the proper origin of meaning in the universe.

Analyzing the most significant features of the great confusion, Voegelin examines a vast range of thought and issues of the age. From the more obvious thinkers to those less frequently studied, this volume features such figures as Calvin, Althusius, Hooker, Bracciolini, Savonarola, Copernicus, Tycho de Brahe, and Giordano Bruno. Devoting a considerable amount of attention to Jean Bodin, Voegelin presents him as a prophet of a new, true religion amid the civilizational disorder of the post-Christian era. Focusing on such traditional themes as monarchy, just war theory, and the philosophy of law, this volume also investigates issues within astrology, cosmology, and mathematics.

Religion and the Rise of Modernity is a valuable work of scholarship not only because of its treatment of individual thinkers and doctrines influential in the sixteenth century and beyond but also because of its close examination of those experiences that formed the modern outlook.

James L. Wiser is Vice President of Academic Affairs at the University of San Francisco. He is the author of Political Philosophy: A History of the Search for Order and Political Theory: A Thematic Inquiry.