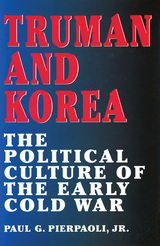 Detailing for the first time the story of America's homefront during the Korean War, Truman and Korea fills an important gap in the historical scholarship of the postwar era. Paul Pierpaoli analyzes the political, economic, social, and international ramifications of America's first war of Soviet containment, never losing sight of the larger context of the cold war. He focuses on how and why the Truman administration undertook a bloody, inconclusive war on the Korean peninsula while permanently placing the nation on a war footing.

Truman and Korea illuminates the importance of the Korean conflict as a critical turning point in the cold war by examining both the immediate and the long-term domestic and foreign policy effects of the conflict. Pierpaoli addresses such important topics as presidential war powers and debates concerning the Defense Production Act; the inner workings of the many war mobilization agencies; the operations and politics of nationwide price and wage controls; questions concerning cold war tax policies and fiscal and monetary policies; and the evolution of national security policy.

Pierpaoli shows that President Truman's decision to intervene in the Korean War quickly became subsumed by larger cold war concerns. By the autumn of 1950 the Korean mobilization program had become the nation's de facto cold war preparedness program, which would come to span nearly forty years and eight presidential administrations. After 1950 the cold war not only continued to significantly shape political and ideological discourse in the United States but also began to reshape aggregate economic policy. By doing so, it altered the nation's industrial and economic contours, giving birth to the concept of an institutionalized "national security state," which in turn spawned the cold war military-industrial-scientific complex.

Based upon extensive research in the papers and official presidential files of Harry S. Truman, as well as many manuscript collections and records of wartime and government agencies, Truman and Korea offers a new perspective on the Korean War era and its inextricable ties to broader cold war decision making.

Paul G. Pierpaoli, Jr., is Assistant to the Superintendent and teaches history at the Virginia Military Institute in Lexington.