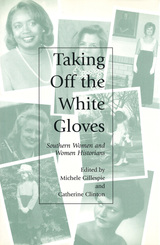 When southern women remove their gloves, they speak their minds. The ten timely and provocative essays in Taking Off the White Gloves represent the collective wisdom of some of the finest scholars on women's history in the American South. On the eve of the thirtieth anniversary of the Southern Association for Women Historians, this volume brings together some of the outstanding lectures delivered by distinguished members of the association over the past fifteen years.

Spanning four centuries of women's experiences in the South, the topics featured in Taking Off the White Gloves range from Native American sexuality and European conquest to woman suffrage in the South, from black women's protest history to the status of women in the historical profession at the end of the twentieth century.

Despite diverse subject matter, these rich essays share a number of important qualities. They take an integrative approach, combining literary analysis, social history, cultural interpretation, labor history, popular culture, and oral history. Embracing the distinctiveness of the southern past and women's experiences within that past, they also recognize the inextricability of critical categories such as sexuality and gender, race and gender, and women and work. Finally, these essays emphasize the authors' commitment to the belief that the personal is political; they reveal the subtle and not so subtle ways that women transform theory into practice.

Taking Off the White Gloves invites a new understanding of the complexities that surround the history of southern women across race, class, place, and time. A model of innovative and imaginative scholarly historical writing, this book provides fertile ground for young scholars and is sure to inspire new research. This thought- provoking volume has much to offer scholars and students, as well as the general reader.

Michele Gillespie is Associate Professor of History at Agnes Scott College in Atlanta, Georgia. She and Catherine Clinton have coedited The Devil's Lane: Sex and Race in the Early South.

Catherine Clinton is the Douglas Southall Freeman Professor of History at the University of Richmond. She is the author or editor of several books, including Tara Revisited: Women, War, and the Plantation Legend.