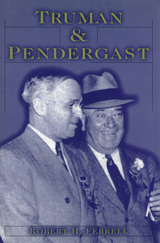 No portion of the political career of Harry S. Truman was more fraught with drama than his relationship with Thomas J. Pendergast. In one of their earliest meetings, the two men were momentarily at odds after Truman, who was then presiding judge of Jackson County, gave a $400,000 road contract to a construction company in South Dakota, and Pendergast, the boss of Kansas City, wasn't very happy about it. He had someone else in mind for the contract. Their association thus had its disagreements, but their common interest in politics was enough to establish a long-lasting relationship.

In 1934, after considering fourteen other men, Pendergast sponsored Truman for the Senate. Although Truman had often cooperated with Pendergast on patronage issues, he had never involved himself in the illegalities that would eventually destroy the Pendergast machine. In fact, Truman had no idea how deeply the Boss had engaged in corruption in his personal affairs, as well as in managing the government of Kansas City. When the Boss was sent to Leavenworth for tax evasion in 1939, Truman was astonished.

Despite Truman's honesty, his relationship with Pendergast almost caused his defeat during the Missouri senatorial primary in August 1940. The main challenger for Truman's Senate seat was the ambitious governor of Missouri, Lloyd C. Stark, who after destroying Truman's sponsor, the Pendergast machine, denounced Truman as "the Pendergast senator." Behind the governor was President Franklin D. Roosevelt, whom Stark turned against Truman. Roosevelt wanted Missouri's electoral votes in his forthcoming bid for a third term, and he believed that Stark could give them to him.

Because of the stigma of Truman's Pendergast connection, the 1940 Democratic primary was the tightest election in his entire political career. He won by fewer than eight thousand votes. In Truman and Pendergast, Robert H. Ferrell masterfully presents Truman's struggle to keep his Senate seat without the aid of Pendergast and despite Stark's enlistment of Roosevelt against him. Ferrell shows that Truman won the election in his typical fashion—going directly to the people, speaking honestly and like one of them.