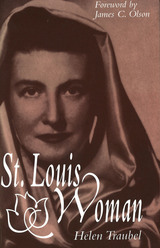 This charming autobiography captures the life story of a fascinating woman—a Missouri girl turned world-class soprano who remained true to her roots through it all. Born and reared in St. Louis and proud of her origins, Helen Traubel grew up in a modest German American family. She spent her teens and twenties singing with church choirs and quartets in the city, studying under first- rate teachers. She did not leave Missouri for New York until she was in her early thirties. Although she replaced the great Kirsten Flagstad at the Metropolitan Opera, she refused to confine herself to singing before elite crowds and prided herself on reaching a larger, more general audience via nightclubs, radio, television, and theater.

St. Louis Woman is filled with candid and amusing stories as full of zest as Traubel herself. In the early 1940s, she secured a rare opportunity to audition for the Ford Hour. Arriving at the studio with a terrible case of poison ivy and an understandably short temper, the diva began singing on cue as the top executives of the program listened from upstairs. During her first song, the booth technicians interrupted her performance with laughter. Furious, she announced she would sing no more and started to leave. Without explanation, the technicians asked her to continue. Traubel later discovered that the higher-ups had called down to the technicians demanding they stop playing the Flagstad record and let "that kid" sing.

The qualities that made Traubel such a notable individual are captured in this entertaining book. Her strong, independent character shines through. Outspoken and at times brutally honest, Traubel recounts her experiences at the Met, as both a popular performer and a teacher. She tells of exasperating moments when she was coaching famous pupil Margaret Truman.

This is not a fact-laden examination of the singer's Wagnerian repertory or a study of high opera; rather this engaging book introduces the reader to a nationally renowned performer who, despite her unmatched talent, retained her hometown identity and lived her life as a St. Louis woman.

Helen Traubel was a soprano at the Metropolitan Opera House in the 1940s.  She also developed her own musical school and shared her talent with wider audiences by performing on radio and television programs.