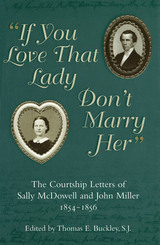 "Could you love me so much that if the whole world turned against us, & we were obliged to live alone, given up by society you could live entirely in me? Could I ever become all the world to you?" --John Miller to Sally McDowell, February 21, 1855

"At last I come to tell you that I am yours. And I pray God to bless us not only in each other but to each other, and to grant us His favor and protection in the important step we are about to take.

If even to this hour I have fears and misgivings, and am disturbed by doubts and anxieties you must forgive me. They grow out of a condition of things as painful as it is unalterable, and out of an anxious temper which is, I think, like dear little Allie's ticklishness "constitutional." They are entirely without justification in anything I know or believe of you for I have the very fullest trust in your affection, and every confidence in your high and honorable character. But the cloud that rests upon the past with me does obscure the present to us both and looks portentous for the future. Yet you must take me with it all. Perhaps I may by and by prove to be something else than a burden to you; and at any rate, my affection is of some value to you, isn't it?" --Sally McDowell to John Miller, April 30, 1855

"If You Love That Lady Don't Marry Her" is a fascinating collection of almost five hundred letters between John Miller (1819-1895) and Sally Campbell Preston McDowell (1821-1895). Their correspondence began in early August 1854 and continued until their marriage in November 1856. The oldest daughter of the late Governor James McDowell of Virginia, Sally McDowell owned and managed Colalto, the family plantation. She was considered part of the South's social and political elite. John Miller, a widower with two young children, was a Presbyterian minister in Philadelphia. Son of Samuel Miller, a founder of Princeton Theological Seminary, he was one of the North's most prominent clergymen.

McDowell and Miller literally fell in love by mail, but one major obstacle blocked their marriage: Sally McDowell was a divorced woman. She had been wed to Governor Francis Thomas of Maryland, but his jealousy and cruelty soon drove her from Annapolis. Although an 1846 legislative divorce freed her to remarry legally, it was not socially acceptable to do so, especially not to "a man of the cloth." So when Miller and McDowell announced their plan to marry, social pressure cost him his pulpit and made her the object of extreme criticism from family members and friends. Although Miller was initially determined to wed despite any opposition, he eventually settled for a long-term engagement to preserve McDowell's social position.

Apart from a few brief visits, Miller and McDowell's relationship depended entirely upon letters. Begun in carefully guarded terms, these letters soon evolved into intimate explorations of their deepening love, their respective gender roles, the problems created by divorce, and religious and familial obligations. McDowell provides the unusual feminist perspective of a divorced woman in mid-nineteenth-century America. As she probes her own inner world, her correspondence with Miller becomes a healing experience through which she gradually surmounts the limitations she experiences as a woman, her depression and the fears resulting from her first marriage, and the stigma of divorce. Ultimately her self- revelations lead to their marriage in November 1856, which lasted until their deaths a week apart almost forty years later.

Because of their unique situation, Miller and McDowell committed to paper the private thoughts and feelings that most couples would have expressed in person. Although their personal relationship forms the principal subject of these letters, the couple also discussed such issues as the growing sectional tensions, national and state politics and politicians, literary figures, church meetings and personages, slave management and behavior, and family and community values and attitudes. Eloquently written, these letters offer a unique window on American society on the eve of the Civil War. They also reveal important information about gender roles and relationship in nineteenth-century America. Because no other book like this exists in print, readers everywhere will welcome "If You Love That Lady Don't Marry Her."

Thomas E. Buckley is Professor of American Religious History at the Jesuit School of Theology in Berkeley, California. He is the author of Church and State in Revolutionary Virginia, 1776-1787.