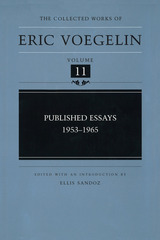 The period covered by the material published in this volume marks the transition in Eric Voegelin's career from Louisiana to Munich. After twenty years in the United States, in 1958 Voegelin accepted an invitation to fill the political science chair at Ludwig Maximilian University, a position left vacant throughout the Nazi period and last occupied by the famous Max Weber, who had died in 1920.

The themes most prominent in the fourteen items reprinted here reflect the concerns of a transition, not only in a scholar's career, and in the momentous shifts in world politics taking place around him, but also in the development of his understanding of the stratification of reality and the attendant demands for a science of human affairs adequate to the challenges posed by the persistent crisis of the West in its latest configurations and by contemporary philosophy.

Several of the items herein originated as talks to a specific organization on problems facing German democratization and the development of a market economy amid the ruins of a fragmented culture and infrastructure in a society without historically evolved institutional supports for a satisfactory social and political order. Accordingly, pragmatic matters occupy a central place in a number of these pieces, especially the overriding question of how Germany could move from an illiberal and ideological political order into a modern liberal democratic one.

Those accustomed to the theoretical profundity of Voegelin's writings may find welcome relief in the down-to-earth, commonsensical drift of this material addressed, often, to laymen and businessmen. But, of course, the philosophical subject matter lurks everywhere. It finds full expression in several instances as the controlling context of even the least pretentious presentations. One of the attractions of these essays is what the author brings forward as serviceable elementary guideposts under adverse conditions of intellectual disarray, social decay, and turmoil.