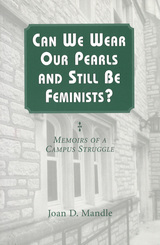 When Joan Mandle accepted the position of Director of Women's Studies at Colgate University, she had specific goals in mind—to make the program stronger, more academically rigorous, and publicly open. The program would resist becoming the captive of identity politics and would refuse to allow itself to become marginalized on the campus. It would reach beyond the negative stereotypes of feminism on campus by appealing to and challenging all students and faculty interested in gender issues and social change.

Just as Mandle anticipated, she faced obstacles during the transformation. Among her critics were feminist students and faculty whose views of a successful program directly contradicted Mandle's. While the new director called for outreach, they insisted on isolation. While she set forth a policy of inclusiveness, they sought to maintain an exclusive community. These individuals preferred the former model of the women's studies program, despite its tendency toward separatism.

Can We Wear Our Pearls and Still Be Feminists? explores women's studies from Mandle's perspective as a program director, feminist activist, and scholar. She offers a vivid account of being forced to grapple with fundamental issues of what women's studies is and should be. Her strong commitment to feminism and women's studies does not prevent her from voicing her concerns; instead, it compells her to share the story of her directorship in hopes of shedding light on the strengths and weaknesses, pitfalls and triumphs of women's studies as an academic discipline.

Through her examination of the battles involved in creating an academically significant and ideologically open program, Mandle provides insight into a possible avenue of change for feminism. By showing how the program at Colgate University was able to encourage campuswide discussions on feminism, Mandle demonstrates that women's studies can succeed as an inclusive and rigorous field. This enlightening memoir provides readers with a window on important debates concerning feminism and women in academia.

Director of Women's Studies at Colgate University in Hamilton, New York, for six years, Joan D. Mandle is currently Associate Professor of Sociology there. She is the author of Women and Social Change in America, among other books.