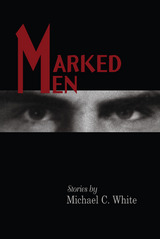 From Michael C. White, the author of the critically acclaimed novels A Brother's Blood and The Blind Side of the Heart, comes a new book, Marked Men. It is a gripping collection of twelve wide-ranging stories about those unexpected moments in our lives when the layers of our defenses are peeled away, one by one, and we are left with the harsh inevitability of our fates. Touching on themes of loneliness and isolation, Marked Men deals with characters who have been alienated from society, from family and friends, from their past, and sometimes from their own feelings.

In "Heights," we meet a young woman whose husband is paralyzed and who must come to grips with the life she now finds herself inhabiting; in "Disturbances," a doctor is called to the scene of a brutal murder, only to discover he will be asked to do much more than pronounce the man dead; in "Burn Patterns," an arson investigator traveling to the scene of a fire picks up a young runaway drifter, an event that causes him to reflect on his own failed marriage; in "The Crossing," a recent widow learns to deal with her fears regarding her alien new life; and in "The Cardiologist's House," the narrator builds model houses at night when he can't sleep and at the same time keeps watch on a neighbor who is having an affair.

These are powerful and moving stories told in White's distinctive style. His earlier prose has been hailed by the New York Times as "stunningly well written" and by Booklist as "remarkable." Engaging the reader from the first line, White provides a suspenseful and surprise-filled journey as his characters face and resolve their conflicts.

Assistant Professor of English at Fairfield University in Fairfield, Connecticut, Michael C. White has written more than forty short stories, which have appeared in publications such as New Letters and Redbook. He is also the founding editor of the yearly anthology American Fiction.