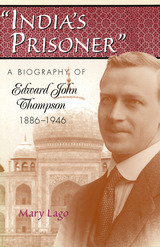 Edward John Thompson—novelist, poet, journalist, and historian of India—was a liberal advocate for Indian culture and political self-determination at a time when Indian affairs were of little general interest in England. As a friend of Nehru, Gandhi, and other Congress Party leaders, Thompson had contacts that many English officials did not have and did not know how to get. Thus, he was an excellent channel for interpreting India to England and England to India.

Thompson first went to India in 1910 as a Methodist missionary to teach English literature at Bankura Wesleyan College. It was there that he cultivated the literary circle of Rabindranath Tagore, as yet little known in England, and there Thompson learned of the political contradictions and deficiencies of India's educational system. His major conflict, personal and professional, was the lingering influence of Victorian Wesleyanism. In 1923, Thompson resigned and returned to teach at Oxford.

Interest in South Asia studies was minimal at Oxford, and Thompson turned increasingly to writing Indian history. That work, and his unique account of his experiences in the Mesopotamian campaign in World War I, supply a viewpoint found nowhere else, as well as personal views of literary figures such as Robert Graves and Robert Bridges. Thompson was also a major influence on the work of his son, E. P. Thompson, a modern historian of eighteenth-century England.

This important biography covers politically significant events between Thompson's arrival in India and up to his death, and casts considerable light on Thompson and his struggles with his religion and his relationship with India. The first biography of E. J. Thompson, "India's Prisoner" will have widespread appeal, especially to those interested in South Asian and English history, literature, and cultural history.

Mary Lago is the author or editor of many books, including Christiana Herringham and the Edwardian Art Scene and E. M. Forster: A Literary Life. Professor Emerita of English from the University of Missouri, Lago lives in Columbia, Missouri.