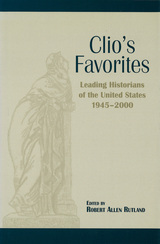 Although historians talk about each other's work routinely, they have been reluctant to record their thoughts about the leading practitioners of U.S. history. Robert Allen Rutland attempts to remedy this state of things with this collection named for Clio, the Greek muse vested with the inspirations of history. The volume offers a glimpse of the lives and work of historians who must be considered among the most remarkable from the last half of the twentieth century.

The roll call of excellence for Clio's Favorites was established after Rutland informally polled some twenty-five historians, asking them to name the outstanding workers in the field of U.S. history since the end of World War II. Among the criteria for selection were: quality (not volume) of the historian's work; influence in the field of study; importance of his or her graduate and undergraduate teaching; and the figure's public persona as reflected by awards, honors, and involvement in public service. The historians profiled in Clio's Favorites, most of whom broke new ground, met and surpassed these standards. The list could have gone on, but Rutland believes these twelve represent the cream of the crop. They are: Bernard Bailyn, Merle Curti, David Herbert Donald, John Hope Franklin, Richard Hofstadter, Howard Roberts Lamar, Gerda Lerner, Arthur S. Link, Edmund S. Morgan, David M. Potter, Arthur M. Schlesinger, Jr., and C. Vann Woodward.

Just as the subject of each essay in Clio's Favorites is a remarkably distinguished historian, the authors of these twelve essays are accomplished historians themselves. Good historical writing is never outdated, Rutland argues. The extensive work of the scholars profiled here has endured and will continue to endure. Likewise, the writing in Clio's Favorites, by twelve expert historians, will survive. This book will be a lasting record of the contributions made by the best U.S. historians practicing their craft over the last fifty years.

Robert Allen Rutland is Research Professor of History at the University of Tulsa. He is also the author of numerous books, including The Democrats: From Jefferson to Clinton, The Republicans: From Lincoln to Bush, and James Madison: The Founding Father (all with the University of Missouri Press).