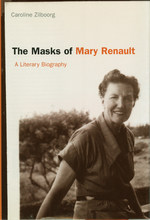 Born Eileen Mary Challans in London in 1905, Mary Renault wrote six successful contemporary novels before turning to the historical fiction about ancient Greece for which she is best known. While Renault's novels are still highly regarded, her life and work have never been completely examined. Caroline Zilboorg seeks to remedy this in The Masks of Mary Renault by exploring Renault's identity as a gifted writer and a sexual woman in a society in which neither of these identities was clear or easy.

Although Renault's life was anything but ordinary, this fact has often been obscured by her writing. The daughter of a doctor, she grew up comfortably and attended a boarding school in Bristol. She received a degree in English from St. Hugh's College in Oxford in 1928, but she chose not to pursue an academic career. Instead, she decided to attend the Radcliffe Infirmary in Oxford, where she trained to be a nurse. With the outbreak of the Second World War, she was assigned to the Winford Emergency Hospital in Bristol and briefly worked with Dunkirk evacuees. She went on to work in the Radcliffe Infirmary's brain surgery ward and was there until 1945.

It was during her nurse's training that Renault met Julie Mullard, who became her lifelong companion. This important lesbian relationship both resolved and posed many problems for Renault, not the least of which was how she was to write about issues at once intensely personal and socially challenging. In 1939, Renault published her first novel under a pseudonym in order to mask her identity. It was a time when she was struggling not only with her vocation (nursing and writing), but also with her sexual identity in the social and moral context of English life during the war.

In 1948, Renault left England with Mullard for South Africa and never returned. It was in South Africa that she made the shift from her early contemporary novels of manners to the mature historical novels of Hellenic life. The classical settings allowed Renault to mask material too explosive to deal with directly while simultaneously giving her an "academic" freedom to write about subjects vital to her—among them war, peace, career, women's roles, female and male homosexuality, and bisexuality.

Renault's reception complicates an understanding of her achievement, for she has a special status within the academic community, where she is both widely read and little written about. Her interest in sexuality and specifically in homosexuality and bisexuality, in fluid gender roles and identities, warrants a rereading and reevaluation of her work. Eloquently written and extensively researched, The Masks of Mary Renault will be of special value to anyone interested in women's studies or English literature.

Caroline Zilboorg is a member of the English faculty at Cambridge University. She is the author or editor of several books, including two volumes of correspondence between H.D. and Richard Aldington and American Prose and Poetry in the Twentieth Century.