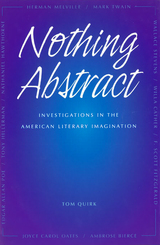 Written by one of the leading scholars in the field, Nothing Abstract is a collection of essays gathered over the past twenty years--all of which, in some fashion, have to do with a genetic approach to literary study. In previous books, the author has traced the compositional histories of certain literary works, the course of individual careers, and the genesis of literary movements. In this book, Tom Quirk resists the direction taken by contemporary theory in favor of an approach to literature through source and influence study, the evolution of a writer's achievement, the establishment of biographical or other contexts, and the transition from one literary era to another.

All of the essays that Quirk has chosen for this collection illustrate a scholarly method. The first two essays, somewhat general in their concerns, constitute a defense for the genetic method, and subsequent essays serve as evidence for the usefulness of genetic inquiry. The entire volume challenges poststructuralist theory not through active confrontation, but merely by being what it is and doing what it does. More important though is that all of the chosen essays are intrinsically interesting. They tell fascinating stories—stories about literary genesis, biographical circumstances, and artistic ambitions and achievement.

Tom Quirk is Professor of English at the University of Missouri-Columbia. He is the author or editor of numerous books, including Bergson in American Culture, Mark Twain: A Study of the Short Fiction and Coming to Grips with Huckleberry Finn.