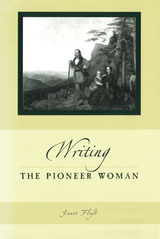 Focusing on a series of autobiographical texts, published and private, well known and obscure, Writing the Pioneer Woman examines the writing of domestic life on the nineteenth-century North American frontier. In an attempt to determine the meanings found in the pioneer woman's everyday writings—from records of recipes to descriptions of washing floors—Janet Floyd explores domestic details in the autobiographical writing of British and Anglo-American female emigrants.

Floyd argues that the figure of the pioneer housewife has been a significant one within general cultural debates about the home and the domestic life of women, on both sides of the Atlantic. She looks at the varied ideological work performed by this figure over the last 150 years and at what the pioneer woman signifies and has signified in national cultural debates concerning womanhood and home.

The autobiographies under discussion are not only of homemaking but also of emigration. Equally, these texts are about the enterprise of emigration, with several of them written to advise prospective emigrants. Using the insights of diaspora and migration theory, Floyd shows that these writings portray a far subtler role for the pioneer woman than is suggested by previous scholars, who often see her either as participating directly in the overall domestication of colonial space or as being strictly marginal to that process.

Written in response to the highly critical discussion of the attitudes and activities of female "civilizers" within "New" Western history and postcolonial studies, Writing the Pioneer Woman will be a valuable addition to the burgeoning discussion of the literature of domesticity.

Janet Floyd is Senior Lecturer in American Studies at King Alfred's College in Winchester, England. She is coeditor of Domestic Space: Reading the Nineteenth-Century Interior.