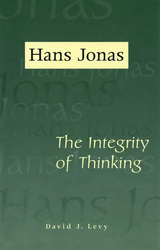 Hans Jonas: The Integrity of Thinking provides the first overall account of the work of Hans Jonas. While Jonas is not the best-known thinker of the twentieth century, David J. Levy shows that he is one of the most important. Levy covers the philosopher’s life and his contributions to the history of religion, philosophical biology, philosophical anthropology, ethics, and theology. Jonas’s work is situated in relationship to that of his first intellectual mentor, Martin Heidegger, as well as that of such related thinkers among his contemporaries as Eric Voegelin.
Setting Jonas’s work in the historical and philosophical context of his life and times, Levy summarizes Jonas’s original achievements in fields as apparently diverse as the history of ancient Gnosticism, the philosophical significance of biology, the problems of ethics in a technological age, and the mysteries of theology, while demonstrating the notable unity of theme and purpose that guided his various fields of inquiry.
Jonas’s work will become increasingly significant in the years ahead as we face the problems produced by current developments in technology such as biological engineering. Such issues were of particular interest for him, and he was unique among his philosophical contemporaries in devoting attention to them. His eloquent writings on these themes bring wisdom and common sense anchored in Jonas’s own historical and biographical experience of the fragility of human life and the common good. Having begun his academic life in Germany between the world wars, he later served in the British army throughout the struggle against Hitler and lost his mother at Auschwitz.
Unlike the scattered works, anthologies, and essays that are currently available, Hans Jonas: The Integrity of Thinking provides a much-needed single, coherent overview of the various fields to which Jonas’s attention was drawn, bringing out the unified, systematic quality of Jonas’s philosophical approach.
AUTHOR BIOGRAPHY
David J. Levy is Visiting Professor of Social Theory and Philosophy at Middlesex University in London. He is the author of several books, including The Measure of Man: Incursions in Philosophical and Political Anthropology.