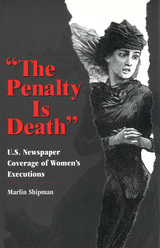 In 1872 Susan Eberhart was convicted of murder for helping her lover to kill his wife. The Atlanta Constitution ran a story about her hanging in Georgia that covered slightly more than four full columns of text. In an editorial sermon about her, the Constitution said that Miss Eberhart not only committed murder, but also committed adultery and “violated the sanctity of marriage.” An 1890 article in the Elko Independent said of Elizabeth Potts, who was hanged for murder, “To her we look for everything that is gentle and kind and tender; and we can scarcely conceive her capable of committing the highest crime known to the law.” Indeed, at the time, this attitude was also applied to women in general.
By 1998 the press’s and society’s attitudes had changed dramatically. A columnist from Texas wrote that convicted murderer Karla Faye Tucker should not be spared just because she was a woman. The author went on to say that women could be just as violent and aggressive as men; the idea that women are defenseless and need men’s protection “is probably the last vestige of institutionalized sexism that needs to be rubbed out.”
In “The Penalty Is Death,” Marlin Shipman examines the shifts in press coverage of women’s executions over the past one hundred and fifty years. Since the colonies’ first execution of a woman in 1632, about 560 more women have had to face the death penalty. Newspaper responses to these executions have ranged from massive national coverage to limited regional and even local coverage. Throughout the years the press has been guilty of sensationalism, stereotyping, and marginalizing of female convicts, making prejudicial remarks, trying these women in the media, and virtually ignoring or simply demeaning African American women convicts. This thoroughly researched book studies countless episodes that serve to illustrate these points.
Shipman’s use of reconstructed stories, gleaned from hundreds of newspaper articles, gives readers a deeper understanding of the ways these dailies reported on the trials and imprisonment of women and how these reports reflected the cultural norms of the times. His detailed narratives of the executions give evidence to the development of journalistic styles and techniques, such as the jazz journalism of the 1920s. By examining anecdotes about how the press reports on the death penalty, Shipman seeks to stimulate discussions about this subject that are more human and less abstract.
“The Penalty Is Death” fills a void in the literature on capital punishment that has long been neglected. Anyone interested in media and press performance, capital punishment, or women’s roles in society will find this book of great value.
AUTHOR BIOGRAPHY
Marlin Shipman is Professor of Journalism at Arkansas State University in Jonesboro.
TABLE OF CONTENTS