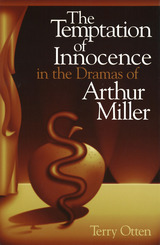 For a half century Arthur Miller has been more than a dramatist. He has been a chronicler of American culture, which he has both celebrated and criticized. The Temptation of Innocence in the Dramas of Arthur Miller examines all of Miller’s plays, from his unpublished undergraduate dramas written at the University of Michigan to Mr. Peters’ Connections, his last performed play. Terry Otten offers a broad critical review and assessment of Miller’s plays in light of the major revival of Miller’s work in the past decade and a growing critical reassessment of his work by the scholarly community.
Focusing on the temptation of innocence, a recurrent theme in Miller’s work, Otten explores the conflict between innocence and personal responsibility, from such widely acclaimed early plays as Death of a Salesman, which forges a “tragedy of the common man,” to his later, near postmodern texts, which treat memory in very different ways. Still locating the presentness of the past as a center of meaning in characters who follow Willy Loman, Miller continues to investigate the role innocence plays in the lives of his more modern characters.
Otten contends that, for over a half century, Miller examined the relationship between self and society in remarkably consistent terms while adapting his art to contemporary changes in concepts of reality. Fully documented and thoroughly researched, this book will prove a valuable source for later studies of Miller and a standard reference for examining the entire range of the plays. Otten avoids critical jargon, making this book an appealing choice for a general audience interested in literature and American culture.
AUTHOR BIOGRAPHY
Terry Otten is Kenneth E. Wray Professor in the Humanities and Professor of English at Wittenberg University in Springfield, Ohio. He is the author of After Innocence: Visions of the Fall in Modern Literature, The Crime of Innocence in the Fiction of Toni Morrison, and The Deserted Stage: The Search for Dramatic Form in Nineteenth-Century England.
TABLE OF CONTENTS