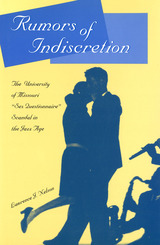 In March 1929 hundreds of students at the University of Missouri received a questionnaire that asked their opinions of marriage, family, and sexual issues. Several questions were regarded as too intimate for university students, especially females. The so-called Sex Questionnaire, the product of a sociology class project, soon fell into the hands of the university’s president, dean of women, and the local press, which deemed it “A Filthy Questionnaire.” The Missouri legislature soon jumped into the controversy as the ensuing uproar went statewide and attracted national attention; a cry arose for the expulsion of the students and professors responsible. Beyond the questionnaire, rumors also circulated that something “too terrible” to mention had gone on at the university. Investigations followed, including one by the American Association of University Professors.
Although the controversy surrounding the questionnaire was not limited to sharp generational lines, college students—part of the decade’s “modern youth”—challenged Victorian ideas held by those who were frightened by the path American society seemed to be following during the 1920s. Nelson places the episode within the history and development of the University of Missouri as well as the “culture war” in America during the Jazz Age. He argues that the decade was marked by both change and the persistence of tradition. But while many sought change, radicals were few. What was actually lost in the Jazz Age was Victorianism and its rigid requirements for an orderly culture in which each member had a sharply defined role, violations of which carried societal sanctions.
Nelson uses the University of Missouri episode to demonstrate that while Victorianism’s unrealistic notions were lost, tradition and its most basic tenets—decorum, respect for authority, a sense of shame, strong family relationships, and the definition of right and wrong—survived. Employing previously untapped archival and printed material, Rumors of Indiscretion examines sexual attitudes, divorce, the “new woman,” the limits of academic expression, and much more in an exciting but uneasy time in American life.
AUTHOR BIOGRAPHY
Lawrence J. Nelson is Professor of History at the University of North Alabama in Florence. He is the author of King Cotton’s Advocate: Oscar G. Johnston and the New Deal.