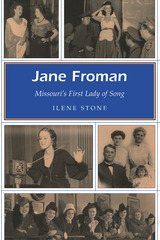 Once asked to name the ten best female singers, the renowned musical producer Billy Rose replied, “There is Jane Froman and nine others.” A legend in her time, Jane Froman (1907–1980) was one of Missouri’s greatest success stories. Her singing career, which spanned over three decades, included radio and television, recordings, nightclub performances, Broadway shows, and Hollywood movies.

Born in University City, Froman spent her childhood in the small town of Clinton and her adolescence in Columbia. After earning her associate degree from Christian (now Columbia) College, she auditioned as a vocalist for WLW, a Cincinnati radio station, and in 1934 was voted the top “girl singer” of the day in a poll of listeners.

At the height of her career, during World War II, Froman volunteered to travel for the USO. On February 22, 1943, her plane crashed into the Tagus River near Lisbon, Portugal. Although she suffered horrible injuries that plagued her for the rest of her life, she continued her singing career. On crutches, she entertained the troops, giving ninety-five shows throughout Europe. Her courageous return was the focus of the 1952 movie With a Song in My Heart,starring Susan Hayward. For scenes that required singing performances, Froman sang the songs through dubbing, and the movie soundtrack became a best-selling record album. Froman’s popularity led to her own television show from 1952 to 1955. In 1961, Froman retired from singing and returned to Columbia, Missouri, where she was active in volunteer work and lived out her remaining years.

Drawing upon an autobiography that Froman started but never finished, Ilene Stone skillfully uses the singer’s own words, along with other resource materials and extensive interviews with people who knew Froman, to produce the first biography of this extraordinary woman. Written in a clear and accessible style, Jane Froman: Missouri’s First Lady of Song will be of great value to anyone interested in Missouri history, women’s studies, or the history of popular entertainment in the twentieth century.
AUTHOR BIOGRAPHY
Ilene Stone became interested in Jane Froman in 1994 after she saw the movie With a Song in My Heart. In 1997, she coauthored One Little Candle: Remembering Jane Froman, an account of Froman’s retirement years. Stone was an adjunct faculty member in American history at San Diego Community College, where she taught for more than thirty years. She currently resides in Spring Valley, California.
TABLE OF CONTENTS