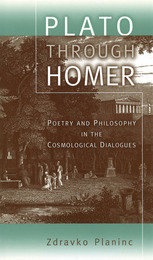 This new study challenges traditional ways of reading Plato by showing that his philosophy and political theory cannot be understood apart from a consideration of the literary or aesthetic features of his writing. More specifically, it shows how Plato’s well-known cosmological dialogues—the Phaedrus, Timaeus, and Critias—are structured using several books of the Odyssey as their shared source text.
While there has recently been much scholarly discussion of the relation between poetry and philosophy in Plato’s dialogues, little of it addresses questions central to thoroughgoing literary criticism. Planinc’s work is unique in that it shows the significance of Plato’s extensive refiguring of key episodes in the Odyssey for an interpretation of his political philosophy.
Plato’s cosmological dialogues are almost always discussed topically. The Timaeus is picked through for its theological or scientific doctrines; the Critias is reduced to its Atlantis story, or puzzled over because of its ostensible incompleteness; and the Phaedrus is read for its parallels to modern understandings of erotics or rhetoric. The dialogues are not usually considered in relation to one another, and then only in the context of developmental schemes primarily concerned with distinguishing periods in Plato’s metaphysical doctrines.
Planinc argues that the main literary features of the Phaedrus,Timaeus, and Critias are taken from books 6 to 9 of the Odyssey, the largest part of the story of Odysseus’s stay with the Phaeacians, from the time he swims to shore and encounters Nausicaa to the time he reveals his identity and begins recounting his earlier travels after hearing Demodocus’s songs. By exploring the full range of the many charming and intriguing things the dialogues present in this literary context, he shows that they are a coherent, unified part of Plato’s corpus.
Plato through Homer takes a radically new approach to Plato’s texts that illuminates their literary and philosophic significance and highlights their enduring appeal.
AUTHOR BIOGRAPHY
Zdravko Planinc is Associate Professor of Religious Studies at McMaster University in Ontario, Canada. He is the author of Plato’s Political Philosophy: Prudence in the Republic and the Laws and the editor of Politics, Philosophy, Writing: Plato’s Art of Caring for Souls (University of Missouri Press).
TABLE OF CONTENTS