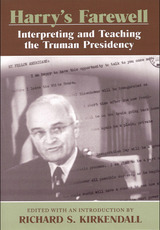 Harry’s Farewell confronts the biggest issue of Truman historiography: the historical significance of Harry S. Truman’s presidency. Exploring the subject from the point of view of Truman’s Farewell Address of January 15, 1953, the book begins by describing the preparation of the address itself by the president and his closest advisers. In it, they challenged the negative view of his presidency that prevailed as he prepared to leave the White House. The book goes on to appraise the presidency in terms of the topics included in the address: the president and the people, the economy, civil rights, the bomb, Containment, Korea, and the end of the Cold War. Four essays follow that cover key topics that Truman did not mention in his speech: the Red Scare, women’s rights, ethnicity, and the environment. The book ends with essays by two major Truman biographers who present their own interpretations of his historical significance.
In addition to interpreting the Truman presidency, the book also deals with the needs of teachers who must bring this subject into their classrooms. Reflecting the importance of education for the Truman Library’s mission, Harry’s Farewell began as a conference at the library that brought researchers and teachers together for four days of conversation about interpretation and teaching. As a result, this book offers documents that teachers can use in their classes and includes an essay, based on the conversations, on ways of teaching the Truman presidency. In addition to being of great value to researchers and teachers, this book provides the general reader with a clearly focused collection of informative and provocative essays on Harry Truman, a man now widely regarded as a great American president.
AUTHOR BIOGRAPHY
About the Editor
Richard S. Kirkendall is Scott and Dorothy Bullitt Professor Emeritus at the University of Washington in Seattle. He is the author of numerous books, including four published by the University of Missouri Press:  Social Scientists and Farm Politics in the Age of Roosevelt;The Truman Period as a Research Field;The Truman Period as a Research Field: A Reappraisal; and A History of Missouri: Volume V, 1919 to 1953.
TABLE OF CONTENTS