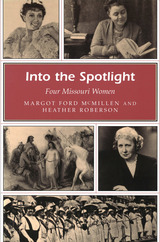 As a companion volume to their earlier book, Called to Courage: Four Women in Missouri History, Margot Ford McMillen and Heather Roberson’s Into the Spotlight provides the biographies of four more remarkable Missouri women. Although these women came from radically different circumstances, they all shared a common sense of purpose, determination, and courage, and each used her own unique position to empower herself and others
Sacred Sun, also called Mohongo, was a Native American of the Osage tribe in Missouri. In 1827, her people lost their land, their sacred places, and many of their traditions. Seeking answers to the dilemma faced by her people, and possibly aid from the French, she journeyed to Europe with a group of prominent Osage and a French entrepreneur. The harrowing events she experienced there would shape the woman she became when she returned to the Osage tribe, which had been forced to move to Oklahoma and was still struggling to survive.
Emily Newell Blair was born into a successful southwest Missouri family. Although she was born at a time when the contributions of women in the workforce were quite limited, she was encouraged by her family to get an education and expand her skills in writing and speaking. When women did begin to pursue education and careers, Blair was at the forefront, working tirelessly to secure voting rights for women. Eventually, she was elected to the Democratic National Committee and later poured her energy into organizing Democratic women’s clubs.
Josephine Baker grew up in segregated turn-of-the-century St. Louis society, which determined human worth by the color of one’s skin. Her mixed ethnic background left Baker feeling isolated both from her own black family and from white society. Driven to develop her own unique style, she became a star of song and stage, toured Europe, served as a spy, and was a fervent civil rights and antiracism activist.
Elizabeth Virginia Wallace, known to her family as “Bess,” grew up in one of Missouri’s most prominent families. She married a neighborhood boy—considered unacceptable by her mother—who would go on to become President Harry Truman. Bess Truman, called “the boss” by her husband, worked side by side with him, editing his speeches and providing advice and guidance through innumerable crises during and after World War II.
Into the Spotlight provides valuable new insights into Missouri and American history, as well as women’s history, and will be a welcome addition to the Missouri Heritage Readers Series.
AUTHOR BIOGRAPHY
Margot Ford McMillen is an instructor at Westminster College in Fulton, Missouri. She is the author or coauthor of several books, including Paris, Tightwad, and Peculiar: Missouri Place Names (University of Missouri Press).
Heather Roberson is a student at the University of California–Berkeley and is coauthor, with Margot Ford McMillen, of Called to Courage: Four Women in Missouri History (University of Missouri Press).
TABLE OF CONTENTS