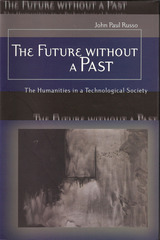 In The Future without a Past, John Paul Russo goes beyond currently given reasons for the decline of the humanities and searches out its root causes in the technologization of everyday life. His main premise is that we are undergoing a transformation at the hands of technological imperatives such as rationalization, universalism, monism, and autonomy. The relation between ourselves and nature has altered to such a degree that we no longer live in a natural environment but in a technological one. According to Russo, technological values have actually eroded human values instead of being “humanized” by them.
What are the implications of this shift for the humanities, traditionally seen as safeguards of the human? Russo addresses this question by situating the decline of the humanities within the larger social and historical panorama. He explores how technological values have infiltrated the humanities to the point of weakening their instruction and undermining their force; at the same time, he shows how the humanities have confronted these trends and can continue to do so. Russo believes that if we understand how technology “works” and the nature of its powers, we will then know in which realms it must be accepted and where it should be resisted.
Russo outlines the components of the technological system and examines their impact on the educational system. He also discusses the loss of historical memory, including the so-called loss of the self and the transformation of the library. He studies the parallels between technological and literary values in criticism and theory, concluding with an analysis of the fiction of Don DeLillo, one of the most prominent contemporary novelists. DeLillo’s exploration of technology in American life, matched by a powerful critique of it from a broadly humanistic and religious perspective, serves to summarize the themes of the book as a whole.
The Future without a Past will appeal to scholars and students of literary studies, intellectual and cultural history, philosophy, ethics, media studies, and American studies, as well as to general readers who are seeking deeper insights into today’s cultural debates.
AUTHOR BIOGRAPHY
John Paul Russo is Professor of English and Director of Graduate Studies at the University of Miami in Coral Gables, Florida. He is the author of I.A. Richards: His Life and Work and co-editor of the journal Italian Americana.
TABLE OF CONTENTS