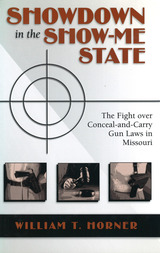 When the Missouri state legislature overrode Governor Bob Holden’s veto in 2003 to make conceal-and-carry the law of the land, the Show-Me State became one of the last in the country to adopt this type of law. In fact, it took years of concerted effort on the part of pro-gun advocates to make this a reality. In Showdown in the Show-Me State, William Horner chronicles this complex and fascinating fight in clear, chronological order beginning with the first bill introduced into the Missouri General Assembly in 1992 and ending with the state supreme court’s decision in 2004 that Missouri’s constitution permitted the legislature to grant Missourians the right to carry concealed weapons.
There is, it is often argued, no state more typically “American” than Missouri. The state is closely divided along partisan lines, as is the nation as a whole, and in the previous century, Missouri voters have regularly chosen the winner in almost every presidential election. By offering an examination of guns and gun policy in Missouri, this book provides a glimpse into the hearts and minds of Missourians and, by extension, of mainstream America as well. Horner’s in-depth case study details the give-and-take among legislators and examines the role that interest groups played in the evolution of this divisive issue.
Horner’s book—part policy analysis, part interest group study, and part history—will appeal to readers with an interest in the issue of gun control or in the political process, and it will provide a thorough resource for those who study policy making at the state level.
AUTHOR BIOGRAPHY
William T. Horner is Visiting Assistant Professor of Political Science at the University of Missouri–Columbia.
TABLE OF CONTENTS