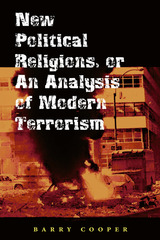 In New Political Religions, or an Analysis of Modern Terrorism, Barry Cooper applies the insights of Eric Voegelin to the phenomenon of modern terrorism. Cooper points out that the chief omission from most contemporary studies of terrorism is an analysis of the “spiritual motivation” that is central to the actions of terrorists today. When spiritual elements are discussed in conventional literature, they are grouped under the opaque term religion. A more conceptually adequate approach is provided by Voegelin’s political science and, in particular, by his Schellingian term pneumopathology—a disease of the spirit.

While terrorism has been used throughout the ages as a weapon in political struggles, there is an essential difference between groups who use these tactics for more of less rational political goals and those seeking more apocalyptic ends. Cooper argues that today's terrorists have a spiritual perversity that causes them to place greater significance on killing than on exploiting political grievances. He supports his assertion with an analysis of two groups that share the characteristics of a pneumopathological consciousness—Aum Shinrikyo, the terrorist organization that poisoned thousands of Tokyo subway riders in 1995, and Al-Qaeda, the group behind the infamous 9/11 killings.

Cooper applies the Voegelinian terms first reality (a commonsense goal regarding legitimate political grievances) and second reality (a fantastic objective sought by those whose rationality has been obscured) to show the major divide between political and apocalyptic terrorist groups. Osama Bin Laden's "second reality" was the imaginary goal that the 9/11 attack was supposed to achieve, and the commonsense reality was what truly happened (the deaths of nearly 3,000 people and the United States's subsequent military response). Cooper shows how such spiritual perversity enables a human being, imagining himself empowered by God, to go on a campaign of mass destruction.

Cooper concludes with a chapter on the uniqueness of terrorist networks, their limitations, and the means by which they can be dealt with. In the ongoing conversations among specialists in terrorist studies, as well as the ordinary discourse of citizens in western democracies wishing to understand the world around them, this book will add a distinctive voice.
AUTHOR BIOGRAPHY

Barry Cooper is Professor of Political Science at the University of Calgary in Alberta, Canada. He is the author, editor, or coeditor of numerous books, including Eric Voegelin and the Foundations of Modern Political Science; Faith and Political Philosophy: The Correspondence between Leo Strauss and Eric Voegelin, 1934–1964; and Philosophy, Literature, and Politics: Essays Honoring Ellis Sandoz, all available from the University of Missouri Press.