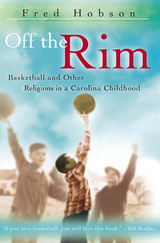 “Why should a particular game, played with a round ball by twenty-year-olds in short pants often hundreds of miles away, mean so much to me, since I seem to have so little to gain or lose by its outcome?” Fred Hobson thus begins Off the Rim, his narrative of college basketball and society, of growing up and not growing up. He seeks the answer to this question by delving into the particulars of his own experience.
Growing up in a small town in the hills of North Carolina where basketball was king, he became a rabid UNC basketball fan (like many others) at the tender age of thirteen during the Tar Heels’ “magical” 32–0 national championship season in 1956–1957. He starred as a high school basketball player and lived a dream by “walking on” the highly successful 1961–1962 Carolina freshman team. That was also the year Dean Smith was elevated to head coach of the Heels. Hobson observed firsthand Coach Smith’s difficult early days before he became the winningest coach in college basketball.
Forced to find a substitute for his beloved sport after not making the varsity his sophomore year, Hobson turned to the romance of books, both reading and writing them. Changing his major to English, he discovered the joys of William Faulkner and Richard Wright, Robert Penn Warren, Flannery O'Connor, and H. L. Mencken, and made a career teaching American literature.
This is a book about basketball that is more than a book about basketball. It is, in the beginning, a depiction of a part of the South that departs from the usual idea of Dixie, a look into the culture, religion, and politics of the Carolina hills. It is a portrait of the people who made up the South, including the author’s parents, who both were and were not conventional southerners. Finally, in some respects, it is the story of a boyhood that never ends, relived each year during basketball season in the frantic, tortured life of a fan.
Although Hobson’s story is largely about the Tar Heels—and about other things related to growing up in the South of the 1950s—what he says about basketball, childhood, and adulthood also holds true for those who find themselves in emotional bondage to Hoosiers or Bulldogs or Ducks, to Wolverines, Gophers, Badgers, and various other species of Upper Midwestern low-lying ground fauna, to Blue Devils or Blue Demons, to Tigers, Wildcats, Cougars, and all other breeds of cat.
AUTHOR BIOGRAPHY
Fred Hobson is Lineberger Professor of Humanities at the University of North Carolina–Chapel Hill. He is the author of numerous books, including The Silencing of Emily Mullen and Other Essays and Tell About the South: The Southern Rage to Explain.
TABLE OF CONTENTS