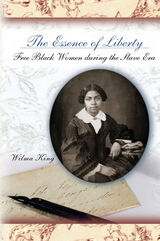 Before 1865, slavery and freedom coexisted tenuously in America in an environment that made it possible not only for enslaved women to become free but also for emancipated women to suddenly lose their independence. Wilma King now examines a wide-ranging body of literature to show that, even in the face of economic deprivation and draconian legislation, many free black women were able to maintain some form of autonomy and lead meaningful lives.
The Essence of Liberty blends social, political, and economic history to analyze black women’s experience in both the North and the South, from the colonial period through emancipation. Focusing on class and familial relationships, King examines the myriad sources of freedom for black women to show the many factors that, along with time spent in slavery before emancipation, shaped the meaning of freedom. Her book also raises questions about whether free women were bound to or liberated from gender conventions of their day.
Drawing on a wealth of untapped primary sources—not only legal documents and newspapers but also the diaries, letters, and autobiographical writings of free women—King opens a new window on the world of black women. She examines how they became free, educated themselves, found jobs, maintained self-esteem, and developed social consciousness—even participating in the abolitionist movement. She considers the stance of southern free women toward their enslaved contemporaries and the interactions between previously free and newly freed women after slavery ended. She also looks closely at women’s spirituality, disclosing the dilemma some women faced when they took a stand against men—even black men—in order to follow their spiritual callings.
Throughout this engaging history, King underscores the pernicious constraints that racism placed on the lives of free blacks in spite of the fact that they were not enslaved. The Essence of Liberty shows the importance of studying these women on their own terms, revealing that the essence of freedom is more complex than the mere absence of shackles.
AUTHOR BIOGRAPHY
Wilma King has a joint appointment in the Department of History and Black Studies at the University of Missouri–Columbia, where she holds the Arvarh E. Strickland Distinguished Professorship in African-American History and Culture. She is the author of Stolen Childhood: Slave Youth in Nineteenth-Century America and editor of A Northern Woman in the Plantation South: Letters of Tryphena Blanche Holder Fox, 1856–1876.
TABLE OF CONTENTS