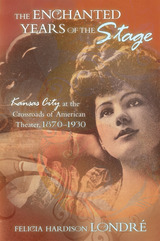 Sarah Bernhardt, Sir Henry Irving, Edwin Booth . . . there was a time when they all played Kansas City. From star-studded engagements at ornate opera houses to risqué shows in Fourth Street honky-tonks, Kansas City was a cow town that wanted to civilize itself through the performing arts. And because it was a railway hub in the heyday of trouping, it opened its doors to America’s traveling performers.

This book chronicles the “first golden age” of Kansas City theater, from the opening of the Coates Opera House in 1870 through the gradual decline of touring productions after World War I. Drawing on the recollections of renowned theater critic David Austin Latchaw and on newspaper archives of the era, Felicia Londré has gleaned long-lost nuggets of theater life—both the legitimate stage and popular fare—to create a fascinating account of a city and its theater culture.

The Enchanted Years of the Stage is brimming with forgotten stories and historical illustrations that offer a new perspective on both the history of American theater and the humor and pathos of performers’ lives. It tells how James O’Neill once chased a messenger boy for ruining a big scene, while Louis James played practical jokes on fellow actors in the middle of Shakespeare performances; how police kept watch over the burlesque girls at the Folly to make sure their act wouldn’t reach the level of indecency allowed in St. Louis; how Orth Stein shot the manager of the Theatre Comique; and how Eddie Foy played his death scene in Kansas City—by dying there. Throughout the book, sidebars of Latchaw’s writing reflect the style and spirit of this bygone era.

Offering a richer view of American theater than have accounts centered on New York, Londré’s book also yields a wealth of new insights into the social and political fabric of an emerging metropolis and testifies to the importance of the arts in the growth and reputation of a great city. By conveying the richness and complexity of road shows in Kansas City—a microcosm of the burgeoning national stage—she gives us a key piece in the mosaic that was American theater in a neglected but unforgettable era.

AUTHOR BIOGRAPHY
Felicia Hardison Londré, former Resident Dramaturg with the Missouri Repertory Theatre, is Curators’ Professor of Theatre at the University of Missouri–Kansas City. Her previous eleven books include The History of World Theater: From the English Restoration to the Present and, most recently, Words at Play: Creative Writing and Dramaturgy.
TABLE OF CONTENTS