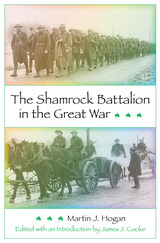 When Martin Hogan began training on a vacant lot to be a soldier, he had no idea that he was about to become part of one of the most famed fighting units of World War I. But soon he and other citizen soldiers from the Irish neighborhoods of New York City were locked in deadly combat with the German army.

Hogan’s book records his recollections of the 165th Infantry in World War I, a regiment in the famed Rainbow Division. Company K of the Third or Shamrock Battalion had a part in every fight, and those who survived had more wound stripes than  did the soldiers of any other company in the American Expeditionary Forces. Few soldiers saw as much of the war in eighteen months as did young Martin Hogan, and in this stirring account he tells of his experiences with graphic power, humility, and humor.

Hogan depicts World War I at its most human level, with memories of combat in the trenches and on blood-soaked battlefields at St. Mihiel and in the Argonne Forest. His account tells us much about how unprepared for service the United States really was, with the National Guard woefully undersupplied and seriously undertrained. His experiences as a gassed, then wounded, soldier also show the reader a side of war that was far from glorious—in a time before penicillin, when the dangers of gangrene ran high—and his memoir conveys rare insight about conditions in American military hospitals where he found care.

This insider view of the frontline experience during the Great War, complete with well-known figures such as Chaplain Father Francis Duffy and Colonel “Wild Bill” Donovan, attests that the Rainbow Division “epitomized the best of the best spirit in the world—the American spirit.”

James Cooke’s new introduction to this edition places that renowned division in historical context. Now that other part-time American soldiers are facing new challenges abroad, Hogan’s account also attests that the National Guard, citizen soldiers who bore the brunt of much decisive fighting, measured up to the highest standards of professional fighting men.

AUTHOR BIOGRAPHY
James J. Cooke is Professor Emeritus of History at the University of Mississippi and lives in Oxford. He is the author of The Rainbow Division in the Great War, 1917–1919.
TABLE OF CONTENTS