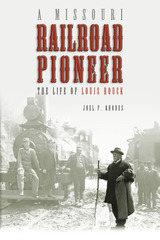 Lawyer and journalist, entrepreneur and philanthropist, Louis Houck is often called the “Father of Southeast Missouri” because he brought the railroad to the region and opened this backwater area to industrialization and modernization. Although Houck’s name is little known today outside Missouri, Joel Rhodes shows how his story has relevance for both the state and the nation.

Rhodes presents a more complete picture of Houck than has ever been available: reviewing his life from his German immigrant roots, considering his career from both social and political perspectives, and grounding the story in both state and national history. He especially tells how, from 1880 to the 1920s, this self-taught railroader constructed a network of five hundred miles of track through the wilderness of wetlands known as “Swampeast Missouri”—and how these “Houck Roads” provided a boost for population, agriculture, lumbering, and commerce that transformed Cape Girardeau and the surrounding area.

Rhodes discusses how Houck fits into the era of economic individualism—a time when men with little formal training shaped modern industry—and also gives voice to Houck’s critics and shows that he was not always an easy man to work with. In telling the story of his railroading enterprise, Rhodes chronicles Houck’s battle with the Jay Gould railroad empire and offers key insight into the development of America’s railway system, from the cutthroat practices of ruthless entrepreneurs to the often-comic ineptness of start-up rail lines.

More than simply a biography of a business entrepreneur, the book tells how Houck not only developed the region economically but also followed the lead of Andrew Carnegie by making art, culture, and formal education available to all social classes. Houck also served for thirty-six years as president of the Board of Regents of Southeast Missouri State Teacher’s College, and as a self-taught historian he wrote the first comprehensive accounts of Missouri’s territorial period.

A Missouri Railroad Pioneer chronicles a multifaceted career that transformed a region. Solidly researched, this lively narrative also offers an entertaining read for anyone interested in Missouri history.

AUTHOR BIOGRAPHY
Joel P. Rhodes is Associate Professor of History at Southeast Missouri State University and lives in Cape Girardeau. He is also author of The Voice of Violence: Performative Violence as Protest in the Vietnam Era and coauthor of Historic Cape Girardeau: An Illustrated History.