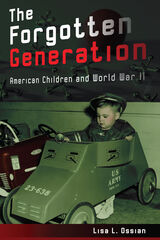 Two days after the attack on Pearl Harbor, President Roosevelt addressed the nation by radio, saying, “We are all in it—all the way. Every single man, woman, and child is a partner in the most tremendous undertaking of our American history.” So began a continuing theme of the World War II years: the challenges of wartime would not be borne by adults alone. Men, women, and children would all be involved in the work of war.
The struggles endured by American civilians during the Second World War are well documented, but accounts of the war years have mostly deliberated on the grown-ups’ sacrifices. In The Forgotten Generation: American Children and World War II, Lisa L. Ossian explores the war’s full implications for the lives of children. In thematic chapters, the author delves into children’s experiences of family, school, play, work, and home, uncovering the range of effects the war had on youths of various ethnicities and backgrounds.
Since the larger U.S. culture so fervently supported the war effort, adults rarely sheltered children from the realities of the war and the trials of life on the home front. Children listened for news of battles over the radio, labored in munitions factories, and saved money for war bonds. They watched enlisted men—their fathers, uncles, and brothers—leave for duty and worried about the safety of soldiers overseas. They prayed during the D-Day invasion, mourned President Roosevelt’s death, and celebrated on V-J Day . . . all at an age when such sharp events are so difficult to understand. Ossian draws from a multitude of sources, including the writings of 1940s children, to demonstrate the great extent of these young people’s participation in the wartime culture.
World War II transformed a generation of youths as no other experience of the twentieth century would, but somehow the children at home during the war—compressed between the “Greatest Generation” and the “Baby Boomers”—slipped into the margins of U.S. history. The Forgotten Generation: American Children and World War II remembers these children and their engagement in “the most tremendous undertaking” that the war effort came to be. By bringing the depth of those experiences to light, Ossian makes a compelling contribution to the literature on American childhood and the research on this remarkable period of U.S. history.
AUTHOR BIOGRAPHY
Lisa L. Ossian is Professor of History at Des Moines Area Community College in Iowa and an alumnus of the East-West Center in Hawaii. She is the author of The Home Fronts of Iowa, 1939–1945 (University of Missouri Press).
TABLE OF CONTENTS
Contents
Preface: The Paradox of Children
Acknowledgments
Introduction: A Child’s Perspective on World War II
1. Almost Christmastime
2. Schools for War
3. Kid Salvage
4. Junior Commandos
5. Soldier Citizens
6. War Waifs
7. Zoot Suits and Victory Girls
8. Gold Stars
Conclusion: The Forgotten Generation
Notes
Bibliography
Index
REQUEST ACCESSIBLE FILE