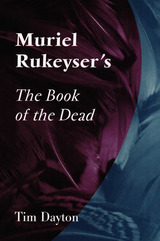 The Book of the Dead by Muriel Rukeyser was published as part of her 1938 volume U.S. 1. The poem, which is probably the most ambitious and least understood work of Depression-era American verse, commemorates the worst industrial accident in U.S. history, the Gauley Tunnel tragedy. In this terrible disaster, an undetermined number of men—likely somewhere between 700 and 800—died of acute silicosis, a lung disorder caused by prolonged inhalation of silica dust, after working on a tunnel project in Fayette County, West Virginia, in the early 1930s.
After many years of relative neglect, The Book of the Dead has recently returned to print and has become the subject of critical attention. In Muriel Rukeyser’s “The Book of the Dead,” Tim Dayton continues that study by characterizing the literary and political world of Rukeyser at the time she wrote The Book of the Dead.
Rukeyser’s poem clearly emerges from 1930s radicalism, as well as from Rukeyser’s deeply felt calling to poetry. After describing the world from which the poem emerged, Dayton sets up the fundamental factual matters with which the poem is concerned, detailing the circumstances of the Gauley Tunnel tragedy, and establishes a framework derived from the classical tripartite division of the genres—epic, lyric, and dramatic. Through this framework, he sees Rukeyser presenting a multifaceted reflection upon the significance, particularly the historical significance, of the Gauley Tunnel tragedy. For Rukeyser, that disaster was the emblem of a history in which those who do the work of the world are denied control of the vast powers they bring into being.
Dayton also studies the critical reception of The Book of the Dead and determines that while the contemporary response was mixed, most reviewers felt that Rukeyser had certainly attempted something of value and significance. He pays particular attention to John Wheelwright’s critical review and to the defenses of Rukeyser launched in the 1980s and 1990s by Louise Kertesz and Walter Kalaidjian. The author also examines the relationship between Marxism as a theory of history governing The Book of the Dead and the poem itself, which presents a vision of history.
Based upon primary scholarship in Rukeyser’s papers, a close reading of the poem, and Marxist theory, Muriel Rukeyser’s “The Book of the Dead” offers a comprehensive and compelling analysis of The Book of the Dead and will likely remain the definitive work on this poem.
AUTHOR BIOGRAPHY
Tim Dayton is Associate Professor of English at Kansas State University in Manhattan.
TABLE OF CONTENTS