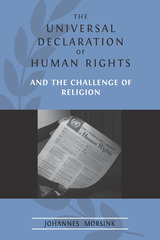 Repulsed by evil Nazi practices and desiring to create a better world after the devastation of World War II, in 1948 the UN General Assembly adopted the Universal Declaration of Human Rights (UDHR). Because of the secular imprint of this text, it has faced a series of challenges from the world’s religions, both when it was crafted and in subsequent political and legal struggles.

The book mixes philosophical, legal, and archival arguments to make the point that the language of human rights is a valid one to address the world’s disputes. It updates the rationale used by the early UN visionaries and makes it available to twenty-first-century believers and unbelievers alike. The book shows how the debates that informed the adoption of this pivotal normative international text can be used by scholars to make broad and important policy points.

Johannes Morsink is Professor of Political Philosophy, Emeritus at Drew University and the author of three books, most recently Inherent Human Rights: Philosophical  Roots of the Universal Declaration.