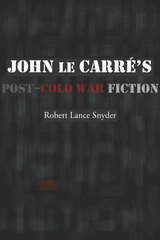 This is an analysis of the first 10 post—Cold War  novels of one of the most significant ethicists in contemporary fiction.

This book challenges distinctions between “popular” and “serious” literature by recognizing le Carré as one of the most significant ethicists in contemporary fiction, contributing to an overdue reassessment of his literary stature. Le Carré’s ten post–Cold War novels constitute a distinctive subset of his espionage fiction in their response to the momentous changes in geopolitics that began in the 1990s. Through a close reading of these novels, Snyder traces how—amid the “War on Terror” and transnationalism—le Carré weighs what is at stake in this conflict of deeply invested ideologies.

AUTHOR BIOGRAPHY
Robert Lance Snyder is Professor Emeritus of English at the University of West Georgia. He is the author of The Art of Indirection in British Espionage Fiction and editor of two other books. He lives in Carrollton, GA.
TABLE OF CONTENTS


Preface
Abbreviations
Introduction: John le Carré’s Post-Cold War Journey
The Night Manager and Our Game: “We Have Met the Enemy, and He Is Us”
The Tailor of Panama and Single & Single: Ludic Fabrication, Self-Begotten Sons, and a New World Order
The Constant Gardener and Absolute Friends: “‘Whoever Owns the Truth Owns the Game’”
The Mission Song and A Most Wanted Man: Covert Surveillance, Deniable Syndicates, and Extraordinary Rendition
Our Kind of Traitor and A Delicate Truth: “‘Who Were We Doing All This Secrecy Stuff For?’”
Conclusion: John le Carré and the Cultural Imaginary
Bibliography
Index