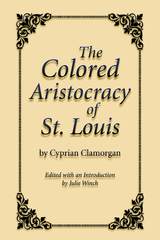 In 1858, Cyprian Clamorgan wrote a brief but immensely readable book entitled The Colored Aristocracy of St. Louis. The grandson of a white voyageur and a mulatto woman, he was himself a member of the "colored aristocracy." In a setting where the vast majority of African Americans were slaves, and where those who were free generally lived in abject poverty, Clamorgan's "aristocrats" were exceptional people. Wealthy, educated, and articulate, these men and women occupied a "middle ground." Their material advantages removed them from the mass of African Americans, but their race barred them from membership in white society.

The Colored Aristocracy of St. Louis is both a serious analysis of the social and legal disabilities under which African Americans of all classes labored and a settling of old scores. Somewhat malicious, Clamorgan enjoyed pointing out the foibles of his friends and enemies, but his book had a serious message as well. "He endeavored to convince white Americans that race was not an absolute, that the black community was not a monolith, that class, education, and especially wealth, should count for something."

Despite its fascinating insights into antebellum St. Louis, Clamorgan's book has been virtually ignored since its initial publication. Using deeds, church records, court cases, and other primary sources, Winch reacquaints readers with this important book and establishes its place in the context of African American history. This annotated edition of The Colored Aristocracy of St. Louis includes an introductory essay on African Americans in St. Louis before the Civil War, as well as an account of the lives of the author and the members of his remarkable family—a family that was truly at the heart of the city's "colored aristocracy" for four generations.

A witty and perceptive commentary on race and class, The Colored Aristocracy of St. Louis is a remarkable story about a largely forgotten segment of nineteenth-century society. Scholars and general readers alike will appreciate Clamorgan's insights into one of antebellum America's most important communities.

AUTHOR BIOGRAPHY
Julie Winch is Professor of History at the University of Massachusetts in Boston. She is the author of Philadelphia's Black Elite: Activism, Accommodation, and the Struggle for Autonomy.
TABLE OF CONTENTS
Contents
Acknowledgments
Abbreviations
Introduction
The Clamorgans of St. Louis
The Colored Aristocracy of St. Louis
Annotations
Bibliography
Index
REQUEST ACCESSIBLE FILE