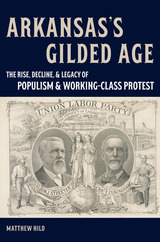 This book is the first devoted entirely to an examination of working-class activism, broadly defined as that of farmers’ organizations, labor unions, and (often biracial) political movements, in Arkansas during the Gilded Age. On one level, Hild argues for the significance of this activism in its own time: had the Arkansas Democratic Party not resorted to undemocratic, unscrupulous, and violent means of repression, the Arkansas Union Labor Party would have taken control of the state government in the election of 1888. He also argues that the significance of these movements lasted beyond their own time, their influence extending into the biracial Southern Tenant Farmers’ Union of the 1930s, the civil rights movement of the 1950s and 1960s, and even today’s Farmers’ Union and the United Mine Workers of America.

The story of farmer and labor protest in Arkansas during the late nineteenth century offers lessons relevant to contemporary
working-class Americans in what some observers have called the “new Gilded Age.”
AUTHOR BIOGRAPHY
Matthew Hild teaches U.S. history and the history of technology and science at the Georgia Institute of Technology in Atlanta. He also teaches U.S. and Georgia history at the University of West Georgia in Carrollton and is the author of Greenbackers, Knights of Labor, and Populists: Farmer-Labor Insurgency in the Late-Nineteenth-Century South. He lives in Atlanta, Georgia.
TABLE OF CONTENTS
Contents
Foreword by Raymond Arsenault
Acknowledgments
Introduction
I. The Roots of Discontent
II. Building the Foundations of Rebellion
III. The Great Upheaval
IV. The Union Labor Party
V. Populism and the Depression of the 1890s
VI. Twentieth-Century Legacies
Appendixes
Notes
Bibliography
Index
REQUEST ACCESSIBLE FILE