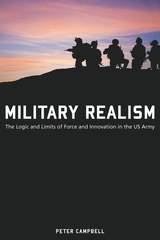 After the Vietnam War, the U.S. Army considered counterinsurgency (COIN) a mistake to be avoided. Many found it surprising, then, when setbacks in recent conflicts led the same army to adopt a COIN doctrine. Scholarly debates have primarily employed existing theories of military bureaucracy or culture to explain the army’s re-embrace of COIN, but Peter Campbell advances a unique argument centering on military realism to explain the complex evolution of army doctrinal thinking from 1960 to 2008.

In five case studies of U.S. Army doctrine, Campbell pits military realism against bureaucratic and cultural perspectives in three key areas—nuclear versus conventional warfare, preferences for offense versus defense, and COIN missions—and finds that the army has been more doctrinally flexible than those perspectives would predict. He demonstrates that decision makers, while vowing in the wake of Vietnam to avoid (COIN) missions, nonetheless found themselves adapting to the geopolitical realities of fighting “low intensity” conflicts. In essence, he demonstrates that pragmatism has won out over dogmatism. At a time when American policymakers remain similarly conflicted about future defense strategies, Campbell’s work will undoubtedly shape and guide the debate.
AUTHOR BIOGRAPHY
Peter Campbell is Assistant Professor of Political Science at Baylor University.
TABLE OF CONTENTS
Contents
Acknowledgments
Abbreviations
Introduction
1. Military Realism: A New Perspective on Military Innovation
2. Flexible Response, the Nuclear Battlefield, and Counterinsurgency: Kennedy and Army Doctrine in the 1960s
3. Army Doctrine in the Shadow of Vietnam: Operations 1968
4. From Active Defense to AirLand Battle: The Cold War Doctrine of the ’70s and ’80s
5. The Power–Projection Army: Doctrine in the Post–Cold War Era until the Eve of September 11
6. Transforming under Fire: The Global War on Terror, Counterinsurgency, Iraq, and Operations 2008
Conclusion
Notes
Bibliography
Index
REQUEST ACCESSIBLE FILE