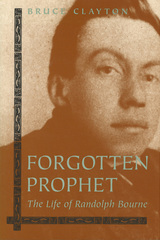 Rarely has an individual's life been so inseparable from his writing as was Randolph Bourne's. His work reveals not only his political viewpoints but also his humanistic personality and the tumultuous era during which he lived. Forgotten Prophet carefully examines the intellect and personality of the "born essayist" who saw clearly both his century's potential for harmony and the danger that it faced from the lingering tides of nineteenth-century European nationalism.

Disfigured and hunchbacked, Bourne reacted to his disability not with bitterness or self-pity, but rather with an exuberant love for beauty and a compassion for humanity that created in him a longing for a truly cosmopolitan society—a "trans-national America" that would draw its strength from ethnic diversity and political pluralism. Nearly alone among American intellectuals, Bourne actively denounced involvement in World War I. He foresaw that, beyond the horrible cost in young lives, the war would bring in its wake the spiritual impoverishment of the nation and the disillusionment of its youth; it would strangle reform and social tolerance, exacerbate racism and nativism, and plant the seeds for further international instability. Although derided and largely ignored at the time they were written, Bourne's fearful predictions would all too quickly be confirmed in the dissolute frenzy of the jazz age, the turmoil of the 1930s, and the social chaos that brought about the rise of fascism in Europe and, soon, an even more destructive war.

Bourne did not live to witness this terrifying unfolding of events. His career as a social critic was brief but prolific. When he died in 1918 at the age of thirty-two, a victim of the flu epidemic, he had completed three books and more than a hundred essays. His first book, Youth and Life, is considered by some to be the original manifesto of the counterculture. From his earliest years as a writer, Bourne was identified as a voice for youth, idealism, and progress in human relations. Forgotten Prophet characterizes Bourne not just as a foreseer of this century's bloodshed but, equally important, as an apostle of hope—a champion of what was best, most truthful in the arts, in politics, and in the conduct of our daily lives.

Bruce Clayton is Harry A. Logan, Sr. Professor of History at Allegheny College in Meadville, Pennsylvania.  He is the author or editor of several books, including W. J. Cash: A Life and Varieties of Southern History.