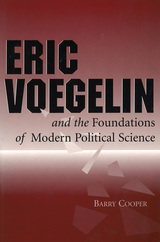 This important new work is a major analysis of the foundation of Eric Voegelin's political science. Barry Cooper maintains that the writings Voegelin undertook in the 1940s provide the groundwork for the brilliant book that is one of his best known, The New Science of Politics. At the time of that book's publication, however, few were aware of the enormous knowledge and accomplished scholarship that lay behind its illuminating, although sometimes baffling, formulations.

By focusing on several of the key chapters in Voegelin's eight- volume History of Political Ideas, especially the studies of Bodin, Vico, and Schelling, Cooper shows how those studies provide the basis for Voegelin's thought. Investigating Voegelin's study of Oriental influences on Western political "ideas," especially Mongol constitutional law, and his study of Toynbee, Cooper seeks to demonstrate the vast range of materials Voegelin used.

Cooper contends that, as with other great thinkers, political crisis, specifically the world war of 1939-1945, stimulated Voegelin's intellectual and spiritual achievement. He provides an analysis of Voegelin's immediate concern with the course of World War II, his ability to understand those dramatic events in a large context, and his ability to provide an insightful account of the causes, the significance, and the consequences of the spiritual and political disorder that was evident all around him.

In Eric Voegelin and the Foundations of Modern Political Science, Cooper makes the connection between Voegelin's political writings of the 1940s and the meditative interpretations that began to appear with the publication of Anamnesis and with the later volumes of Order and History much more intelligible than does any existing discussion of Voegelin. Scholars in intellectual history and political science will benefit enormously from this valuable new addition to Voegelin studies.

Barry Cooper is Professor of Political Science at the University of Calgary in Canada. He is the author or editor of numerous books, most recently Eric Voegelin's History of Political Ideas, Volume VI, Revolution and the New Science.