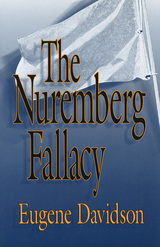 Available for the first time in paperback, The Nuremberg Fallacy examines the inherent shortcomings of the Nuremberg "rules of war" and the War Crimes Tribunal's impossible expectations. In 1946, the Tribunal declared all aggressive war, war crimes, and crimes against humanity illegal. Yet the period since World War II has witnessed an unprecedented number of armed conflicts. In light of recent crises, including those in Rwanda, Bosnia and Serbia, and the Middle East, it is clear that the issues explored in The Nuremberg Fallacy are as relevant today as they were at the time of the book's first publication a quarter century ago.

In this volume, Eugene Davidson continues his investigations begun in The Trial of the Germans (University of Missouri Press), which studied the Nuremberg trials themselves, by focusing on five major conflicts since the end of World War II: the Suez crisis of 1956; Algeria's war of independence; Israel's recurring (and ongoing) battles with its Arab neighbors, complicated and worsened by intervention of the superpowers; the wars in Southeast Asia; and the Soviet Union's suppression of Czechoslovakia and other border states of Eastern Europe.

By exploring the roots and ramifications of these five conflicts, Davidson is able to chart the crosscurrents between large and small states, between individual nations and the United Nations, between the rules of Nuremberg and the significantly older rules of self- interest. The result is a thoughtful and thought-provoking study of the dynamics of war and peace in the post-Nuremberg world.

The rules of war proclaimed at Nuremberg—observing the flag of truce, prohibiting attacks on surrendered enemies, treating prisoners of war and civilian populations humanely—have become virtually irrelevant in modern guerrilla warfare. If anything, Davidson suggests, conditions have actually become worse than they were before the Nuremberg War Crimes Tribunal.

The continuing importance and relevance of The Nuremberg Fallacy is best summarized in the final sentences of Davidson's text: "The survival of a nation cannot be successfully entrusted to simplistic formulae or to principles that reflect unworkable doctrines. No computers have been programmed for the wisdom that remains essential for survival. People still have to provide that from their own inner and outer resources, no matter how far the weapons may seem to have outdistanced them."

Eugene Davidson is the author of numerous books, including Reflections on a Disruptive Decade, The Death and Life of Germany, The Trial of the Germans, The Making of Adolf Hitler, and The Unmaking of Adolf Hitler, (all with the University of Missouri Press). President Emeritus of the Conference on European Problems and former President of the Foundation for Foreign Affairs, Davidson lived in Santa Barbara, California, until his death at the age of ninety-nine.