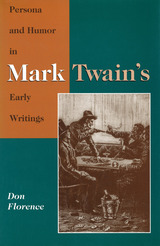 In Persona and Humor in Mark Twain's Early Writings, Don Florence explains that Samuel Clemens did more than use the borrowed name of Mark Twain to sign his writings. He also developed a separate identity, or persona, becoming "a literary personality in his own right."

Challenging mainstream Twain criticism on many fronts, Florence focuses exclusively on Twain's early writings. He demonstrates how Twain evolved in his early narratives into the "Mark Twain" we now recognize. Florence maintains that this process was evolutionary: Although Twain might have been dependent on Clemens for the initial experiences, they become Twain's experiences, necessary for his development as a persona. Traditionally, critics of Twain have been preoccupied with dualities, but Florence sees this emphasis upon polarities as an oversimplification. He argues that much of Twain's humor strives to shape more and more of the world, giving Twain multiple narrative voices and letting him be inclusive, not exclusive.

Finally, this study asserts that there is more continuity to Mark Twain's career than has been generally recognized. Many Twain scholars have argued that Twain's later writings are radically different from his earlier writings because of their emphasis upon illusion and dream. Florence argues that the preoccupation with illusion and fantasy is scarcely new. Whether Twain's mood is exuberant or dark, he emphasizes subjectivity over objectivity, the dominance of fantasy, the creative powers of humor, and his ability as persona to determine what we consider "reality." Florence contends that Twain's early writings show Mark Twain gradually evolving into a masterfully comic persona.

Jargon-free and eloquently written, Persona and Humor in Mark Twain's Early Writings provides a fascinating look at Mark Twain's developing genius and will be a welcome addition to Twain literature.

Don Florence holds a Ph.D. in English and lives in Truth or Consequences, New Mexico, where he is working on a study of Twain's middle writings.