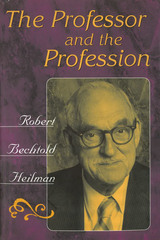 Robert Bechtold Heilman is one of the last survivors of a remarkable generation of American critics that included such literary giants as Cleanth Brooks, Allen Tate, and Edmund Wilson, men to whom literary criticism was not a profession or an academic necessity but a calling. In a distinguished career that has spanned nearly six decades, Heilman has influenced generations of scholars and critics through his exquisitely written commentaries on subjects ranging from William Shakespeare to Thomas Hardy.

In The Professor and the Profession, Heilman looks back over his life and times from his perspective as both an academic and an American. Differing in theme and subject matter, the essays included in this collection are ultimately unified by the author himself. Whether the topic is football, Robert Penn Warren, or education, Heilman's generous and intelligent voice emerges on every page. Yet this collection is more than one academic's personal reminiscences; it is a reflection upon American literary history itself.

In the first section of essays, "The Self Displayed," Heilman reveals how he developed from a small-town boy into a distinguished critic and teacher, touching upon his participation in baseball and love of football along the way. "Writers Portrayed" and "Literary Types and Problems Inspected," the following sections, offer his opinions on the past and on the current state of American literary criticism, including personal portraits of such renowned friends as Eric Voegelin, Robert Penn Warren, Theodore Roethke, and Malcolm Cowley. The final section, "Education Examined," is an enlightening inquiry into the development of American universities in the twentieth century.

A fascinating chronicle of a significant academic life, The Professor and the Profession will appeal to a broad array of scholars, from young academics wanting to know where they came from to those of Heilman's generation who can appreciate this personal reminiscence into the world of letters.

Robert Bechtold Heilman is the author or editor of some twenty books, most recently The Workings of Fiction. He is Emeritus Professor of English at the University of Washington in Seattle.