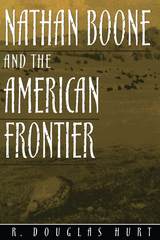 Celebrated as one of America's frontier heroes, Daniel Boone left a legacy that made the Boone name almost synonymous with frontier settlement. Nathan Boone, the youngest of Daniel's sons, played a vital role in American pioneering, following in much the same steps as his famous father. In Nathan Boone and the American Frontier, R. Douglas Hurt presents for the first time the life of this important frontiersman.

Based on primary collections, newspaper articles, government documents, and secondary sources, this well-crafted biography begins with Nathan's childhood in present-day Kentucky and Virginia and then follows his family's move to Missouri. Hurt traces Boone's early activities as a hunter, trapper, and surveyor, as well as his leadership of a company of rangers during the War of 1812. After the war, Boone returned to survey work. In 1831, he organized another company of rangers for the Black Hawk War and returned to military life, making it his career. The remainder of the book recounts Boone's activities with the army in Iowa and the Indian Territory, where he was the first Boone to gain notice outside Missouri or Kentucky. Even today his work is recognized in the form of state parks, buildings, and place-names.

Although Nathan Boone was an important figure, he lived much of his life in the shadow of his father. R. Douglas Hurt, however, makes a strong case for Nathan's contribution to the larger context of life in the American backcountry, especially the execution of military and Indian policy and the settlement of the frontier.

By recognizing the significant role that Nathan Boone played, Nathan Boone and the American Frontier also provides the recognition due the many unheralded frontiersmen who helped settle the West. Anyone with an interest in the history of Missouri, the frontier, or the Boone name will find this book informative and compelling.

R. Douglas Hurt is Professor and Director of the Graduate Program in Agricultural History and Rural Studies at Iowa State University in Ames. He is the author or editor of numerous books, including African American Life in the Rural South, 1900-1950 and Agriculture and Slavery in Missouri's Little Dixie.