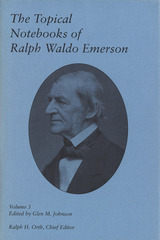 "Ralph Orth...has been indefatigable in giving us volumes of the highest accuracy and usefulness," said American Renaissance Literary Report. Volume 3 completes the series that brings twelve of Emerson's topical notebooks and four other notebooks into print for the first time. In this final volume, Glen Martin Johnson presents four of the topical notebooks dating from the mid 1840s through the early 1870s, the end of Emerson's productive life. The notebooks include diverse material from which Emerson wrote his lectures, essays, and books.

Each of the four notebooks illustrates some of the many uses Emerson made of these collections of quotations and ideas: OP Gulistan is a compendium of biographical information and anecdotes about dozens of Emerson's acquaintances; S Salvage takes stock of and preserves parts of his earlier writings; ZO was used in preparing the lectures that became "Poetry and Imagination"; and ML was employed for extensive notes on the moral law and religion, and as a resource in preparing lectures and readings during the late 1860s.

The publication of these notebooks renders an invaluable service to the scholarly community and to students of American literature. Collectively, they dipict in great detail the subtle changes that occurred in Emerson's thought from the beginning until the end of his career to give a complete picture of the man and the writer. The younger Emerson, whose writing abounds with enthusiasm, became someone whose darker wisdom about inevitable limitations was expressed in essays such as "Fate" and "Illusions." The notebooks in this volume will allow us to better understand the last three decades of Emerson's career, which have remained less than fully explored.