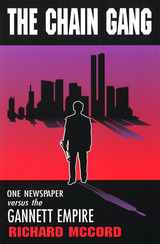 "They're closing in on me, Dick, and I'm afraid they're going to get me," said Frank Wood, publisher of the Green Bay News-Chronicle, in a phone call to his friend and colleague, Richard McCord. Drained of cash and spirit, Wood could not hold out much longer against a devouring giant, the Gannett Company. As editor and publisher of the nationally distinguished weekly Santa Fe Reporter, McCord had successfully fended off Gannett's "Operation Demolition" when it moved into town. Now Wood was seeking the help of a survivor.

Startling case histories of the dubious tactics practiced by Gannett, unsparing insights into the newspaper industry, and harsh conclusions all come together in the dramatic story of these two men's efforts to save the small Green Bay daily from being obliterated at the hands of the nation's largest newspaper chain. Their success is a metaphor for one of the oldest triumphs of the world: that of David over Goliath.

"McCord has done something marvelous with this. He's taken a deeply disturbing nationwide trend and put it on a small midwestern stage with real characters. The Chain Gang's message needs to be heard by as many Americans as read newspapers. Already Gannett's monopoly tactics have impoverished communities across the country. McCord is one man fighting back, coolly, rationally, creatively, and stubbornly. Let's join him."—Michael Shnayerson, Contributing Editor, Vanity Fair

"More graphically than almost any other available record of the era, the Gannett piracy is what has happened to this country, tolled where the price is truly paid, in the lives of communities and people."—Roger Morris, winner of the Investigative Reporters and Editors' National Award for Distinguished Investigative Journalism

"Richard McCord's The Chain Gang takes the losing battle for the soul of American newspapers from the euphoric accounts on financial pages to show what corporate news chains can mean in human terms to the people and the vitality of the victimized cities and towns. His is a unique account of the power and depredations of the Gannett Chain under its glib empire builder, Allen Neuharth. It goes behind the facade of slick public relations and financial killings for investors to show what happens when a ruthless and ambitious wheeler-dealer gets control of our news."—Ben H. Bagdikian, media critic and Pulitzer Prize winner

Richard McCord has been a professional journalist for more than twenty-five years at Newsday in New York and at the Santa Fe Reporter in New Mexico. His work has been honored for excellence by the Scripps Howard Foundation, the National Press Club, the National Newspaper Association, and Investigative Reporters and Editors.