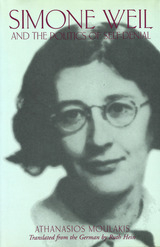 Simone Weil and the Politics of Self-Denial delivers what no other book on Weil has—a comprehensive study of her political thought. In this examination of the development of her thought, Athanasios Moulakis offers a philosophical understanding of politics that reaches beyond current affairs and ideological advocacy.

Simone Weil—philosopher, activist, mystic—unites a profound reflection on the human condition with a consistent and courageous existential and intellectual honesty manifest in the moving testimony of her life and her death. Moulakis examines Weil's political thought as an integral part of a lived philosophy, in which analysis and doctrine are inseparable from the articulation of an intensely personal, ultimately religious experience.

Because it is impossible to distinguish Weil's life from her thought, her writings cannot be understood properly without linking them to her life and character. By situating Weil's political thought within the context of the intellectual climate of her time, Moulakis connects it also to her epistemology, her cosmology, and her personal experience.

Simone Weil and the Politics of Self-Denial presents the unfolding of Weil's philosophical life against the backdrop of the political and social conditions of the last days of the Third French Republic, the Spanish Civil War, and the rise and clash of totalitarian ideologies. The ideological climate of the age—of which Weil herself was not quite free—was indeed the major "obstacle" in the struggle against which she fashioned her critical, intellectual, and moral tools.

Weil has been categorized a number of ways: as a saint and a near convert to Roman Catholicism, as a social critic, or as an analytic philosopher. Moulakis examines all aspects of Weil's thought in the indissoluble unity in which she lived them. This thorough investigation pursues the particular intellectual affiliations and the social and political experiential stimuli of Weil's work while simultaneously teasing out the timeless themes that her own timely analysis was intended to reveal.

Athanasios Moulakis is Herbst Professor of Humanities at the University of Colorado. He is the author of Beyond Utility: Liberal Education for a Technological Age, winner of both the 1994 Frederick W. Ness and the Choice Magazine Outstanding Academic Book awards, and editor of Eric Voegelin's History of Political Ideas, Volume I: Hellenism, Rome, and Early Christianity and Order and History, Volume II, The World of the Polis.