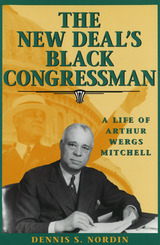 In this fascinating biography, Dennis S. Nordin chronicles the life of Arthur Wergs Mitchell, the first black Democrat to be elected to Congress. Although he is now one of history's forgotten figures, Mitchell was once almost as well known among black college students as Jesse Owens and Joe Louis. Nordin, however, shows that Mitchell's achievements and thus his fame were the direct result of his dishonorable deeds.

Mitchell's life began humbly in rural Alabama in 1883. After a memorable boyhood, he studied briefly at Tuskegee Institute, which had a major effect on Mitchell's outlook. He went on to study law in Washington, D.C., and thereafter became involved in politics when the Republicans sent him to Chicago in 1928 to campaign for Herbert Hoover. Impressed by Chicago's ward system and patronage politics, he returned to the city and made a bid for a congressional seat, changing political parties in an effort to oust black Republican Congressman Oscar DePriest. To accomplish this, Mitchell resorted to "Uncle Tomming," ingratiating himself with the white bosses of the Chicago Machine.

Within five years a Machine nomination was in hand, and Mitchell found himself owing his political success and thus his loyalty to the Chicago Machine. Because he was under strict orders from Chicago Mayor Ed Kelly not to cause problems or be confrontational, Mitchell rarely, if ever, supported the interests of his constituents.

It was only in the later years of his political career that Mitchell began to show opposition to his Machine backing. He had been an opponent of the NAACP in his first years in Congress, but later became a strong supporter of an NAACP antilynching bill. In 1937, Mitchell sued three railroad companies for not offering equal treatment and accommodations for all passengers. The case went to the Supreme Court, which gave Mitchell a favorable ruling. As a result of these "confrontational" acts, the Chicago Machine quickly decided not to endorse Mitchell in the elections of 1942.

In his research, Nordin relies on such primary sources as manuscripts, newspapers, and court records, as well as information from interviews with Mitchell's friends, neighbors, colleagues, political rivals, and widow. Woven tightly together, these sources form a narrative that reveals a most complex and intriguing individual, a man whose political and moral views and acts were strongly linked to the goals of the great Chicago political Machine.